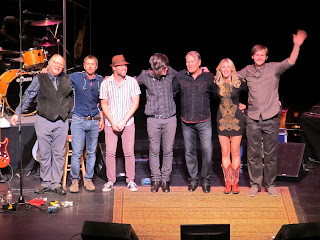 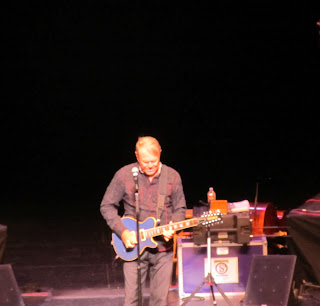 This concert is part of Glen's Farewell Tour.  He announced last year he'd been diagnosed with Alzheimer's.  I'd never seen him and he is one of my all time favorites.  There was a day when he and The Beatles sat side by side on my mantel of musical greats.
Knew it would be bittersweet, this show.  Also was prepared for it to be not a very good concert.  Trying to cover my bases.  Brace for the worst, right?  Couldn't have been more wrong.  This show was so much better than I thought it would be.
He started the show with my all time favorite song ever, "Gentle On My Mind," which was written by John Hartford.
Yes, he forgot a few lyrics early in the show, but would pick right back up and after the first couple of songs, he did fine.  He didn't miss anything on guitar.  In fact, he was mind blowing.  Did several solos and it was unreal how locked in he was.  Stellar as ever!  Great to watch!
He was like a kid at times. When on his prompter the name of the next song he was going to play would come up, sometimes he'd go "Oh, I really like that one!" or "Oh, that is one of my favorites!"
He mentioned Jimmy Webb probably 1/2 a dozen times. The first was when he was introducing "By The Time I Get To Phoenix" and he said "naturally, Jimmy Webb." What struck me about that was a few years ago when I saw Jimmy Webb down at Blue Rock (next to seeing Bruce Springsteen, about my biggest highlight ever) and Jimmy told the story (he's got a bunch and in the grand tradition of the Irish, is a master storyteller) about making it. He said the reason he was successful was due to 2 people who, every time they sang one of his songs, would tell their audience "and that was written by Jimmy Webb" and those 2 people were Frank Sinatra and Glen Campbell. So here we are, 30 some years later, and Glen is still telling the audience, giving Jimmy his props.
He was backed by a 6 piece band, 3 of whom are his kids.  His daughter keeps a pretty close eye on him during the performance.  Struck me how tough that must be.  The pianist has been with Glen for 35 years.  They did a couple of Jimmy Webb songs together, one being "The Moon Is A Harsh Mistress," just the two of them on stage and that was very poignant.
We got all of the hits.  "Galveston," "Rhinestone Cowboy," "Wichita Lineman," "Southern Nights," "Try A Little  Kindness," "True Grit," "Where's The Playground, Susie."  I wish I could remember which song it was but he even yodeled!  It was great!  Played about 70 minutes.  Paid $69 for the ticket.  A bargain as I won't forget this evening.  We also got to hear his most recent, "A Better Place."  It's a great song with lyrics that are in the present:
"One thing I know
The world's been good to meA better place, awaits you'll seeSome days I'm so confused, LordMy past gets in my wayI need the ones I love, Lord
More and more each day"
Mentioned his kids being part of the band.  His one son plays drums, another plays guitar and his daughter is a multi-instrumentalist playing banjo, mandolin and keyboards.  She and Glen did a killer "Dueling Banjos" together.  For all I know she may play more but I saw her play all 3 of these.  Anyway, they are good!  I've seen enough kids who I felt wouldn't be on the stage if they didn't have the last name.  Not the case here.  This is the classic fruit not falling far from the tree.  They were Glen's opening act (not the drummer) but the other 2 sang and played for 30 minutes.  They were really good.  Played original music and held the audience.  That's not so easy as an opener, sometimes, but not the case with these 2.  The other son, the drummer, only played when Glen came out.  I couldn't get over how good he was, either.
I hadn't thought about it until being at this performance.  I see what music does for people with dementia/Alzheimer's all the time but hadn't thought about the musician who is struck by it.  I'll bet music will be the last thing to leave him.  I hope playing guitar is one of the last things he ever does. 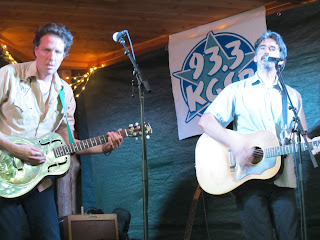 Hadn't seen Slaid in a full show in probably 2 years.  Gorgeous night at Shady Grove to sit out under the big oaks and listen to new songs, old songs, covers and always, the yodeling!
What was also exciting about this concert is it was announced that Scrappy Jud Newcomb would be part of his band, on lead guitar.  Rounding out the trio was Chojo Jacques on fiddle/mandolin.  He's played with Slaid for quite a while.
I thought it was going to be interesting to hear Slaid with somebody different on guitar.  Seems like Michael O'Connor and Slaid have been together forever.  I love Michael.  Think he is one of the greats in this town and that is saying a lot.
The first thing that was different was Scrappy playing electric and resonator, no acoustic.  Michael was always on an acoustic.  Scrappy was pretty laid back at this show.  I think he is pretty much brand new to the band so he seemed to be really going by feel.  Still good to hear him again as he's one of my favorites and I hadn't seen him in a while.
Slaid did all of his standards:  "Hard To Believe"  "Horsehoe Lounge" "Drinkin Days" "Horses and Divorces" "One Good Year" "Broke Down" to name a few.
Talked about Don Walser quite a bit.  Covered him on "Rolling Stone From Texas."
Also played several new songs, all of which sounded vintage Slaid and good.
The show lasted about 2 hours, 2 sets.  This was a free show, sponsored by a local radio station.
I took two videos.  One song is going to be on the new cd which is coming out real soon.  It's called "The Texas Love Song."  Here is the link:  http://www.youtube.com/watch?v=IYP23CmbqJ8&feature=plcp
Second video is here:  http://www.youtube.com/watch?v=vTgxJUIZn8Y&feature=plcp  It's called Rust Belt Fields and was written with Rod Picott.  He said this one has never been released.  It's really good and lyrically made me think of Springsteen.
Great to see Slaid again after a too long time away.
Posted by Deb at 8:58 PM No comments: 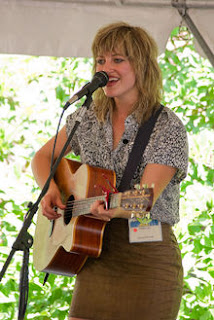 When this concert was announced, there wasn't a second thought for me.  I got turned on to "Hadestown" by a musician here in Austin who said I had to hear it.  Bought it and have been a fan since.  Her latest, "Young Man In America" was recently released and is a real marvel.  Needless to say, I was looking forward to this show.
Somebody who I was sitting next to asked me to describe her as he was not familiar with her.  Well, she's a folk singer but that's not enough.  She sounds differently from everybody else.  She's got an edge.  Can be quite gentle.  Sharp lyrics.  Oh yeah, she also wrote a folk opera ("Hadestown").  I think you'll really like her.
First off, she had weather issues and didn't arrive at Blue Rock until 5 minutes before it was to start!  Her misfortune was our good fortune as we got to be entertained by Devon Sproule and Paul Curreri.  They were there for the show and were asked to play a few songs.  They floored everybody in that place, I do believe.  Her music is very stripped back, Smoky Mountains sounding, think Gillian Welch only doesn't sound like her, just great like her!  Did a song called "Ain't That The Way."  It was a head bopping, bouncy sounding little ditty that you couldn't help but smile through.  And Paul, holy cow, can that man sing.  He did a song called "California" and I loved it!  And they both are guitar players.  They're not strummers.  He also did some singing with Devon and the two of them going back and forth was spectacular.  Turns out they've recently relocated to Austin and I can't wait to see a full show of both.  I know they're married but I believe they do their own thing and aren't a duo.
Then Anais came out, cool as a cucumber. If she was frazzled at all, arriving at the last second, it didn't show.  Complete professional.  She was very funny.  Told us about the nightmare getting to the show.  Did almost all, if not all, of "Young Man In America."  Turns out it is her dad on the cover of the cd when he was a young guy.  One of the stories she told us about.
Also did several from "Hadestown" and Devon and Paul joined her for a couple of those.  Turns out they had performed it with her in West Virginia, taking on some of the parts on the album that were sung by the likes of Greg Brown and Ani Difranco, among others.
Anais live is very captivating.  Has a unique, gorgeously different voice.  Very emotive.  Then her lyrics.  Listen to them.
2 sets.  Probably 2 solid hours of music.  $25 cover.
Kinda neat at the end.  We were having a big thunderstorm, rare around these parts.  We had a cool lightning show.  She ended the night with Dylan's "A Hard Rain's A-Gonna Fall."  Devon jumped up with her, spontaneously.  Great ending.
As per Blue Rock, no photos or video.
Posted by Deb at 8:01 PM No comments: