Little late getting this one out because the morning after the show I was on a plane bright and early for a one week vacation.  Sadly, the seven days flew by!
You know, one of the reasons I stopped blogging, well, the main reason was a change in living situation that just doesn't lend itself to seeing lots of live music and secondly, when I do manage to go to a show, I tend to go see people I've seen numerous times.  It's pointless to write about the same people, say the same things.
And I will say I have seen Terri numerous times so already I'm contradicting myself, right?!
Anyway, my brother was in town, flew in that day and he always likes to catch a show so I started looking around and saw this one.  Told my brother a little bit about her, he'd been to the Cactus once before (Kevin Welch) and loved both the venue and Kevin so felt we couldn't go wrong heading to see anybody there. Which is basically right.
So for this show Terri had Lloyd Maines on guitars and all other walks of stringed instruments along with Glenn Fukunaga on bass.  It was truly a GREAT show!  They were cooking, it was that way from the get go and just kept going.
As always, she does a good job pacing a show.  I have no idea but my guess is she doesn't scribble down 20 songs five minutes before showtime.  Her shows are too well put together.  I appreciate that.
We got 2 lengthy sets.  No opener so the show started around 8:15 and I think we walked out of there around 11.  Cover was $20 and that's a bargain for this trio.  Room was packed to the gills.  The Cactus has a few different ways they set up the room and for this show it was the maximum number of chairs, no tables.  Well, there were 2 tables right in front of the stage reserved for band guests and that's it.  We got there early so we had primo seats up front at an angle to the stage which is cool because when Lloyd was sitting we could still see him play.  That kind of stuff is what I look for when entering a room, best vantage point to watch the players play.  You don't have to worry at Cactus about getting a good sounding area.  It's a small room and the sound is always great.
Like I mentioned, the band was cooking.  Maybe it was because she hadn't played there in a couple of years, the packed house, I don't know.  It just seemed more on fire than I'd seen in a while.
What was neat for me was seeing my brother's reaction.  I was a bit worried as he'd been up since 4am, flew to Austin and now here we are and it's getting kind of late, is he gonna make it?  At the break he turned to me and said "My God, she is great!  How is it I've never heard her?"  There was no question we'd be staying for the second set.  Through the end of the evening, every time I looked over at Bill, his toes were tapping, he was in it all the way.  I got a big kick out of that.  Always when someone sees/hears somebody for the first time and they're blown away, that is exciting to witness!  And where my brother is concerned, he's 5 years older than me and was my musical guide/educator for about the first 30 years of my life.  When I was in high school and he was in college, I was listening to Joni Mitchell while my friends were still wishing The Beatles hadn't broken up.  Hence, his really loving Terri was a thrill for me.
The show itself.  Lots from "Cry Til You Laugh" and songs from throughout her career.  Her music is quite diverse, you know, blues, folk, country rock, bluegrass, jazz and we got a bit of it all.  She also threw in a few gospels songs.  Playing the harmonica more and more.  It was funny, one of my friends said "I remember when she first started playing the harmonica she wasn't very good.  Can't say that now!"  No you can't.
No pictures or video.  My camera was already packed for my trip!
Oh, one more thing.  Her bass blayer, Glenn Fukunaga, just released his own cd called "Not A Word."  It's a jazz instrumental.  Bought it at this show.  Is it ever good!  If you like real jazz, not that New Age crap, do yourself a favor and check it out:
http://www.cdbaby.com/cd/glennfukunaga
Posted by Deb at 10:10 AM No comments: 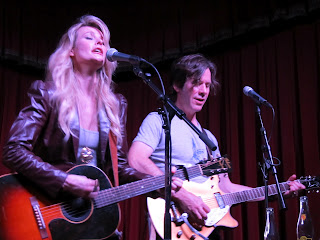 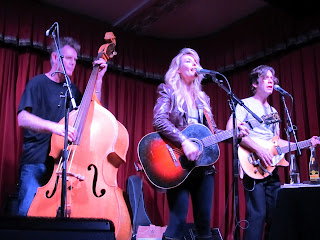 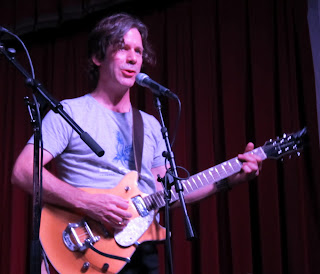 Great night.  First time seeing her.  Big fan of her radio show on Outlaw Country (satellite radio).  She's razor sharp, hilarious and plays great music.  Turns out seeing her live you get the same thing, only it's all her music along with some good covers thrown in.
She was backed by Tim Carroll on lead guitar and a guy named Bones on upright bass.  They put on a heckuva show.  I hadn't heard her music before.  Not sure why.  I believe she played songs mostly from her two most recent records, "Balls" and "Welder."  Her songs run the gamut.  Some are plain funny, witty ditties while others are dang good honky tonk or killer ballads.  She threw in a Merle cover and did a couple of rocking, gospel songs which she learned as a kid and they were excellent.  Between songs it was like listening to a stand up comic.  She played close to 1 1/2 hours without a break.  There was never a song or a minute where she didn't have the crowd.  It was that good.
Opening was Tim Carroll.  Besides her lead guitarist, he's a songwriter in his own right.  Came out with his electric guitar and played maybe 45 minutes.  He was fantastic.  Kind of a punky, country guy.  Writes great songs.  I really enjoyed listening to him and he too, had the audience with him all along the way.  Lastly, he happens to be married to Elizabeth.
So, for $15 I got one great show in the best listening room in Austin.  Can't ask for more.
Managed to snag a video of "El Camino."  Here it is:
http://bit.ly/z0iSbJ
Posted by Deb at 3:03 PM No comments: