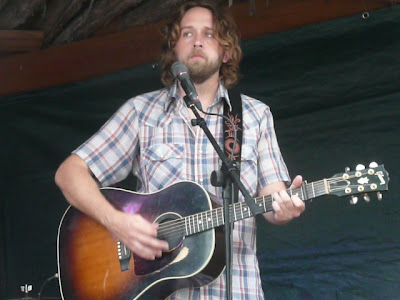 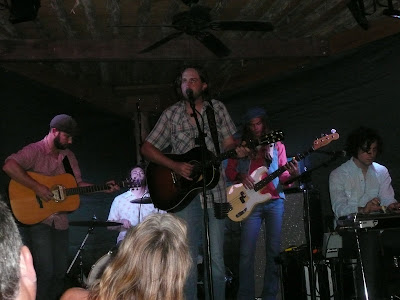 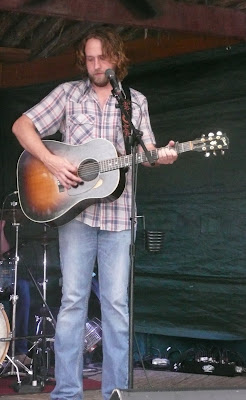 This turned out to be kind of a surprising show. I've seen Hayes once before and it was a rollicking, high time at Threadgill's. He has an avid fan base. They are best described as those who like to overindulge on cigs, beer and just want to dance and party the night away. I figured we'd get the same type of carnival atmosphere for this performance. We didn't. In fact, it was pretty darn mellow.
I think Hayes writes great songs. He kind of carries the blue collar, just a good old boy badge but he is one heckuva writer. A true poet. A traveling troubadour, to be sure. Not to mention, he wrote the best country song ever, "She Left Me For Jesus." He didn't play it on this night, darn it.
We did get many selections off his great "Trouble In Mind" album: "Bad Liver and a Broken Heart," "Girl Downtown," "It's A Shame," "I Got a Gig." Also got some older songs like "Little Rock" and "Down The Road Tonight." He played a couple of new songs, one of which might be called "Stomp and Holler." Sounded like vintage Hayes.
This was not a high energy show. Maybe because Hayes was in day 3 of not smoking, I don't know. It was a good show, don't get me wrong. But it didn't have that drive that gets everybody up off their rears. He's got so many great shuffles and country boogies that get you going, usually. Maybe he just felt like mellowing out for an "unplugged" show.
I have one beef with Shady Grove. They installed new spotlights about 2 months ago, maybe. They're really great. For some reason, on this night, they didn't adjust them for the band members so Hayes and the other 2 up front players were in the dark the entire evening. Meanwhile, we got the drummer and bass player in the lights all night. Ridiculous.
You can catch a glimpse of one of his new songs here:

http://www.youtube.com/watch?v=Jr-8FIOJW8A&feature=channel_page
Posted by Deb at 4:01 PM No comments: 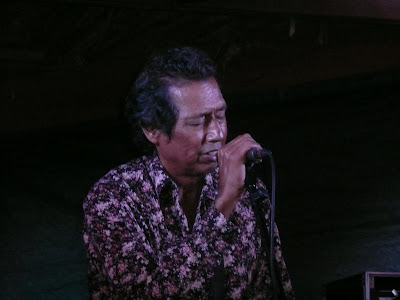 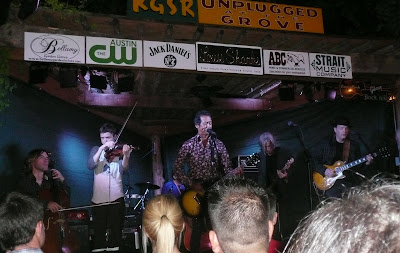 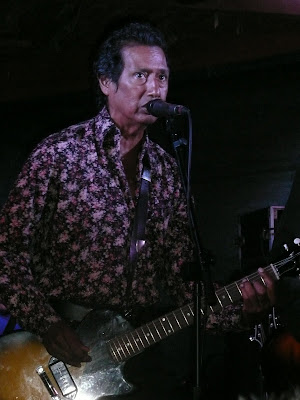 Another free summer series which takes place every Thursday night at Shady Grove. I was really looking forward to this one. Alejandro is one of my favorites. His band is always great and he really demands much from them. It is fun to watch him inspire them during the show.
This show was short, about an hour and then back up for a 2 song encore. But, it was full throttle from the get go and remained full speed ahead all the way through. Just a smoking performance!
On this night Susan Voelz was not on violin. Probably she is out with Poi Dog Pondering. I think they are touring these days. The great thing about being based in Austin is Alejandro could grab another great violinist by the name of Warren Hood. This guy is terrific and has quite a following of his own. Everyone was excited to see him playing with Alejandro!
We got several selections from his latest "Real Animal" along with some older stuff from his days with the True Believers like "Everybody Loves Me" and one or two new ones. Sounds like he is working on a new record currently. He did an awesome "Sister Lost Soul" in honor of Stephen Bruton and told a wonderful story about Stephen, also. It was really touching.
By the end of the set, everyone was up, dancing and singing. This does not happen often at this series of shows. But man, the guy rocked his rear end off. Not that he has one. But if he did...
Posted by Deb at 3:41 PM No comments:

SHELLEY KING and her Band 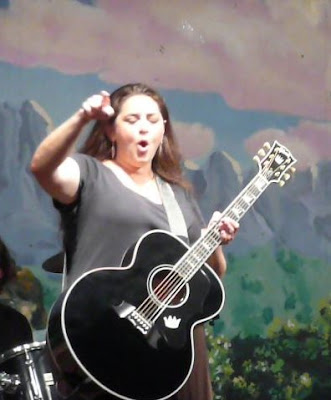 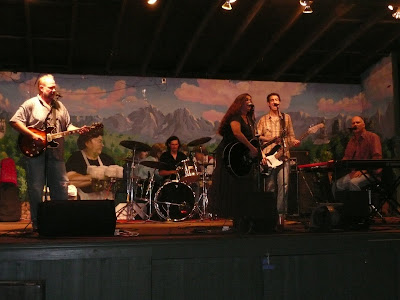 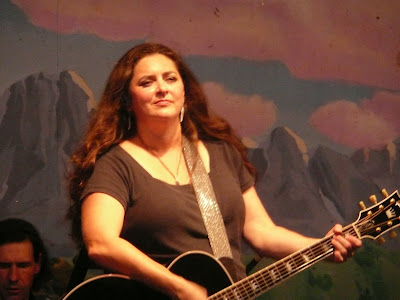 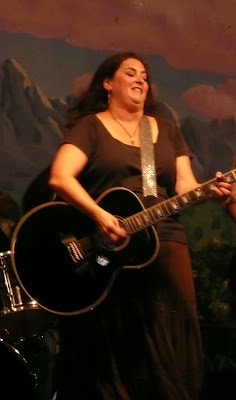 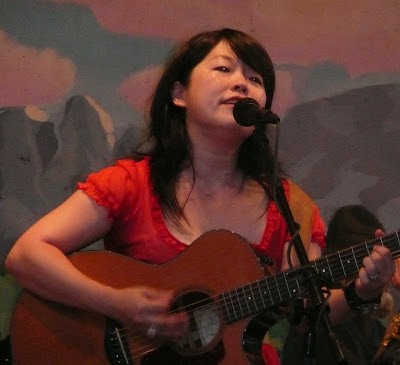 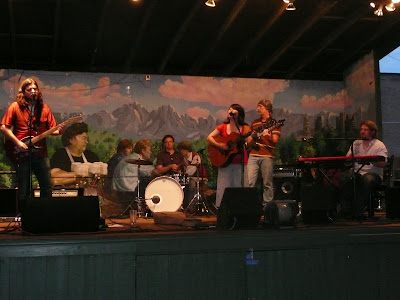 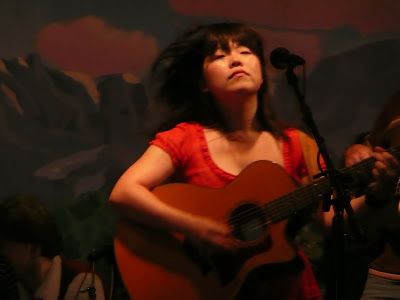 BETTYSOO and SHELLEY KING at Scholz 9-9-09

Had just returned to Austin on this day from a week's vacation and couldn't think of a better way to get back into the Austin vibe than going out to this show. A double bill featuring 2 of the best this town has to offer. And that is saying a lot.
BettySoo was up first and this was a full band show. I can't really continue to write much about BettySoo because I've seen her so often lately I'll just end up repeating myself. Suffice to say, I don't get tired of going to see her, solo or with the band, ever. Her songs don't get old, and if she chats it up between songs, it's always funny, witty stuff. Something I may not have talked about before is that when she does covers, they are knock outs and we got a great, new one tonight. The song is called "What Do You Want From Me Now?" and was written by a fellow named Ralston Bowles. It's just a brutally, beautiful song. Anybody who writes that great of a song, I need to check out! In fact, I just took 5 minutes and ordered the cd that song comes from, "Rally at the Texas Hotel." Anyway, BettySoo and the band play the heck out of it. She needs to record it. You can see it here:

Next up was Shelley King with her band. I enjoyed her as much as ever. She and this band sound so good. Whether it's a shuffle, honky tonk, bluesy, swampy thing, doesn't matter. Your toes are tapping. She puts on a fun rocking show. She's written a number of great songs and we got to hear several: "Call of My Heart," "Texas Blue Moon," "Running Out of Blue," "One Way Ticket to Austin," and of course her great new single "Summer Wine."
This was part of a free series held every Wednesday during the summer in the beer garden at Scholz.
Posted by Deb at 2:36 PM No comments:

WILL TAYLOR and STRINGS ATTACHED 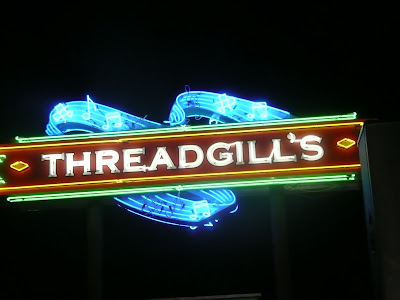 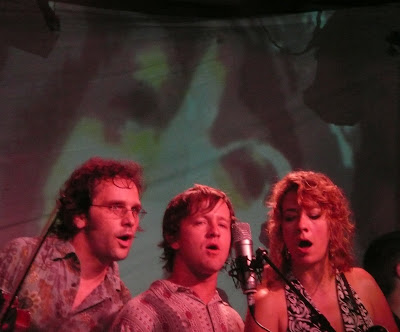 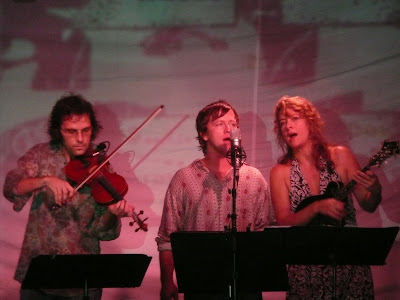 WILL TAYLOR and STRINGS ATTACHED at Threadgill's 8-29-09

On this night they were doing The Beatles' "Rubber Soul" album. Guest vocalists were Karen Mal and Jayme Ivison. This guy Jayme, what a great voice! I had never heard him before and he was terrific! This show was very good. The highlight for me was their version of "Wait." Will always takes these songs and arranges them in a very unique way. For this one, he turned it into a salsa number. It was awesome. Would love to have a copy of this song, especially. Like I've said before, you can't go wrong with a night of The Beatles, but Will always makes the music fresh, different and a pleasure to listen to.
They also had a neat light show and backdrop. Look at the pictures to see some of The Beatles peering down on the show : )
Posted by Deb at 3:35 PM No comments: 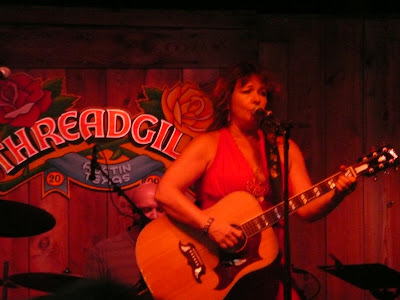 SHELLEY KING and her Great Band 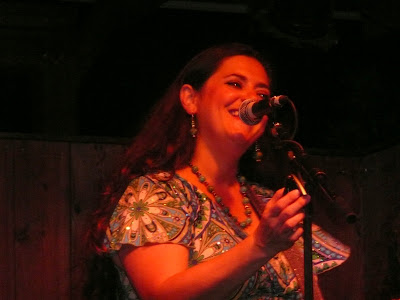 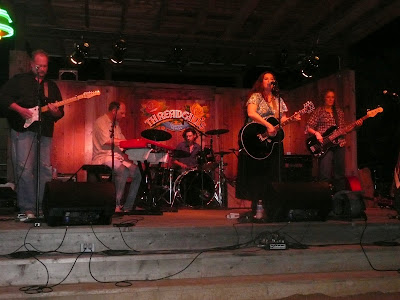 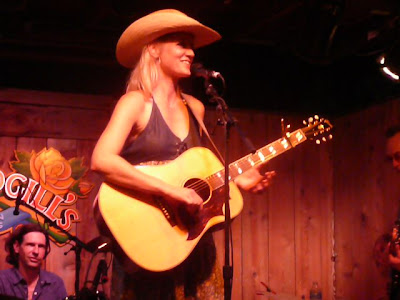 Boy, it feels like a long time since I was at this show. It's been a little over 2 weeks with a vacation thrown in, but I'll try to remember as best I can.
This was a triple bill among friends so there was a neat camaraderie and much collaboration.
First up was Floramay. I was not aware of her at all until this night. She made a fan out of me straight away. Country rock with a cool voice, nice melodies, good lyrics and a great stage presence. She likes to kick it up and that makes it fun to watch. She gets swampy, country, folky, bluesy and rocks it, too. I can't wait to see her again. She has a new record out called "Dreams." I will be picking it up. I did video a song from it called "Things You Do." Shelley & Leeann sing on it, too. Check it out here:

Next up was Shelley. I was so excited to see her again with the band and they did not disappoint. I love this cast of characters. They are great musicians, singers and the songs are toe tappers, great rhythms, just so much fun, period. I find myself smiling through her entire show. You can't beat that. She writes great songs and she's got a bunch of them. I did get a killer video of them doing "Call Of My Heart." It really captures their vibe, I think. Right here:

Leeann Atherton is someone I've heard of but never seen until this night. I was looking forward to it. She has a new record out called "Heart Traveled Road" and this was a cd release show. What a surprise! She has one of those voices, like Lucinda Williams or Lou Ann Barton, that drips with Southern soul. You just can't be white and sing like that unless you are from the south. Don't ask me why. That's just how it is. She does a lot of bluesy, gospel, roots rock type stuff. I was pretty tired by the time she came on but her voice grabbed me. I look forward to seeing her again when I'm more alert. I think I"m gonna like her a lot.
Posted by Deb at 2:52 PM No comments: