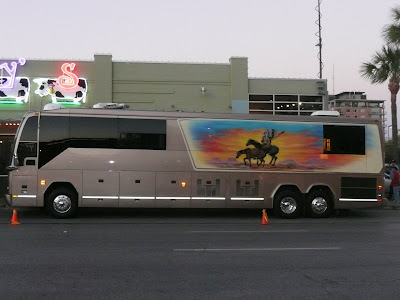 BE ON THE LOOKOUT

If you ever see this bus on the road again, better saddle up behind, BREATHE DEEPLY and HOLD IT, as this is Willie's!
Posted by Deb at 11:43 AM No comments:

WILLIE NELSON and ASLEEP AT THE WHEEL 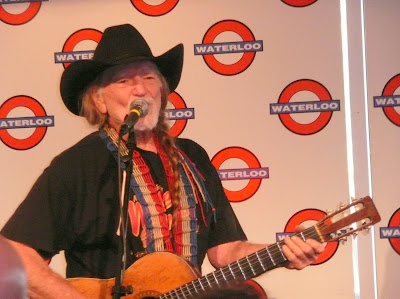 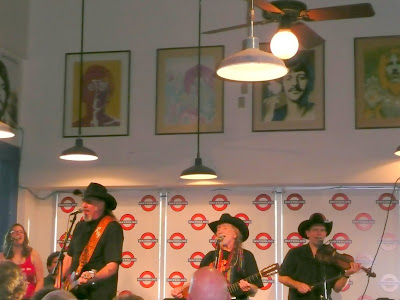 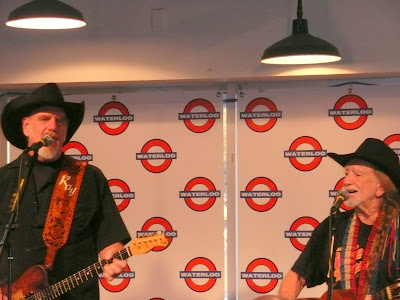 Ok, this was billed as an in-store performance by Asleep At The Wheel only. However, since they just released a new record called Willie And The Wheel, a joint collaboration of Western Swing, and Willie lives just outside Austin, many were hopeful. All day rumours were rampant on Facebook. Waterloo's page mentioned a very special guest showing up and that was all they could say.
For in-stores where Waterloo expects a big crowd, it works like this: you can go to the store any time that day, buy a cd and get a wristband. Buy 2 cds, get 2 wristbands, etc... The in-stores start at 5pm. At 4:30 they clear the store and those with wristbands form one line and those without form another. Wristbands go in first for prime viewing and then people without wristbands get to enter.
My friend James and I got there about 3:30. James bought 2 cds and gave me his extra wristband. We went next door to Waterloo Ice House, had a cold one and waited to line up. At this time I should mention everybody knew it was going to happen. The Wheel's bus was already parked but they had the orange cones in place holding a spot for another bus to pull in.
At 4:50pm the 2nd bus arrived and shortly thereafter a roadie walked in with the guitar that is unmistakeably Willie's. At 5:10 The Wheel took the stage. They played 2 songs, "Miles and Miles of Texas" and "Route 66." During the 3rd song, which I don't remember what it was, Willie walked in. At that point it didn't matter what that song was because it got completely drowned out by the crowd going nuts.
Willie welcomed everybody and he and The Wheel settled in. Usually these in-stores last 30 minutes, 45 tops. Not this one. They played for an hour! Much of the new record was played, and being in Austin, they played Townes Van Zandt's classic, "Pancho and Lefty." Willie did several guitar solos and seemed to be having a great time. He was very warm, smiling often and chatty with the audience.
It was pretty wild to have him in a little record store, playing songs, for free. And don't forget, Waterloo provides free beer for these shows, also!
Afterward, Willie hung around, signed everything and anything and posed for photos. He couldn't have been any nicer.
The guy is a living legend. I don't believe anywhere else on earth this could happen except Austin.
Posted by Deb at 11:07 AM No comments: 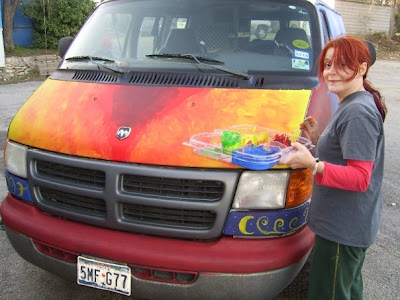 Speaking of Carolyn's van going up for sale on ebay soon - with all proceeds going to ArtZ - take a look!
Posted by Deb at 2:17 PM No comments: 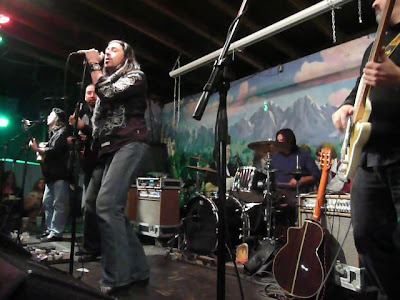 The night ended the way it began, loud and rocking! Del Castillo is Latin funk at its best.
Posted by Deb at 8:35 AM No comments: 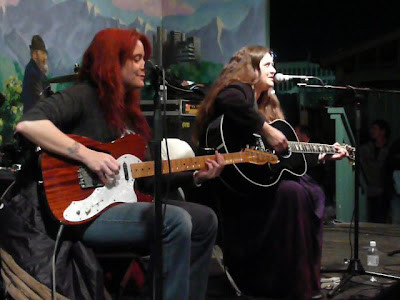 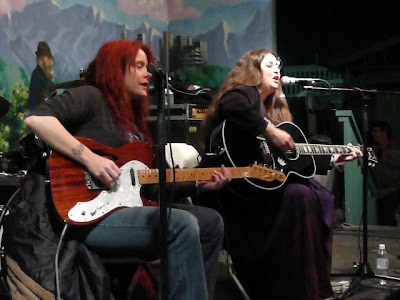 These two are the first musicians I ever saw play at Artz. They used to play every Wednesday evening. Shelley still does play there on some Wednesdays. They just got back from a 2 week tour of Japan together. Carolyn is also going to auction off her van she used to live/tour in. It has over 300,000 miles on it and is sitting over in Artz's parking lot now.
Posted by Deb at 8:23 AM No comments: 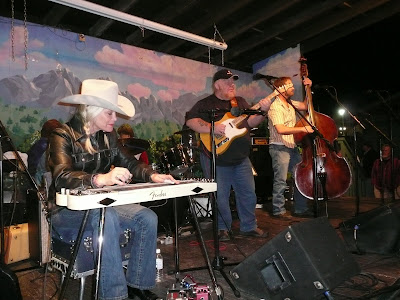 Redd is the master of the telecaster who plays hillbilly, jazz, you name it and has played lead for so many great artists (Merle Haggard, Alison Krauss, Mavis Staples) it's crazy. He was accompanied tonight by Cindy Cashdollar on steel. She has played with a few notable musicians also including Bob Dylan, Van Morrison and Marcia Ball. Between them they have several grammys. She is great!
Posted by Deb at 8:10 AM No comments: 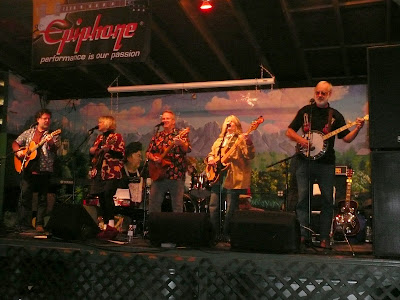 They've been around forever. Here's my favorite song title which pretty much indicates how much fun this group is: "Teenage Immigrant Welfare Mothers On Drugs."
Posted by Deb at 8:05 AM No comments: 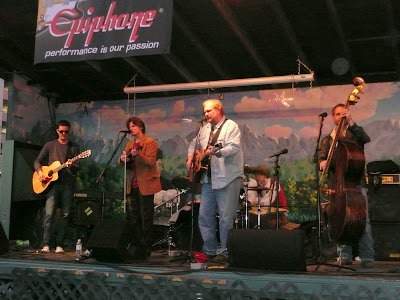 After Slaid we got one of Austin's best bluegrass bands.
Posted by Deb at 8:03 AM No comments: 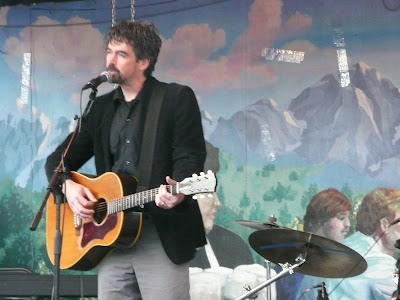 One of Austin's best singer/songwriters who told the story of how he used to do the sound at Artz's every Monday night.
Posted by Deb at 7:59 AM No comments: 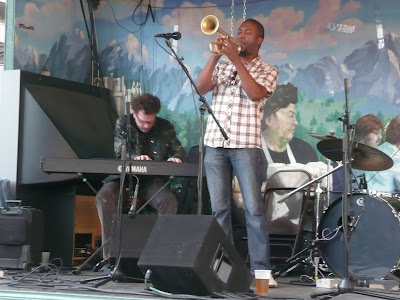 After Jon Emery we took a left turn and had a jazz trumpet player who was accompanied by a pianist. It was mellow and nice.
Posted by Deb at 7:56 AM No comments: 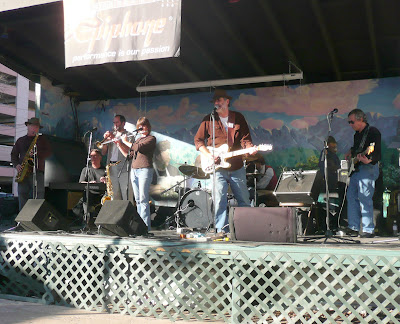 This band is a mix of funk and hillbilly rock n roll. They kicked things off in a rousing way!
Posted by Deb at 7:50 AM No comments: 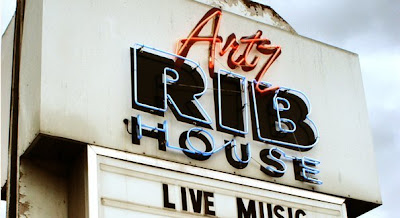 This past Sunday Austin put on a benefit for a long time restaurant and live music supporter who, due to a family medical emergency and financial woes, closed down the business. Once the local music community became aware of the situation, everyone rallied to help the owners, Art and Z, save their establishment. Admission was $10 with live music from 4-10pm. The place was packed! I don't know what Scholz holds but there must have been over 500 people in the beer garden alone. Inside was mobbed also. There were 8 musical acts, each playing for 30 minutes. A silent auction was also held with many items donated by local musicians.
Posted by Deb at 7:23 AM No comments: 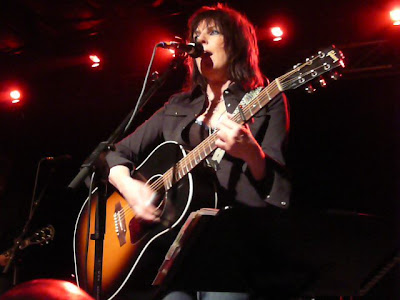 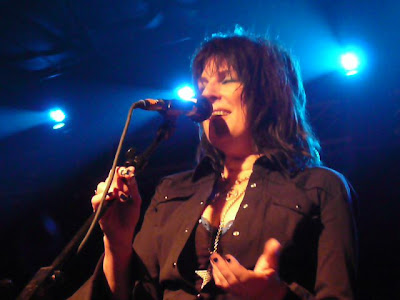 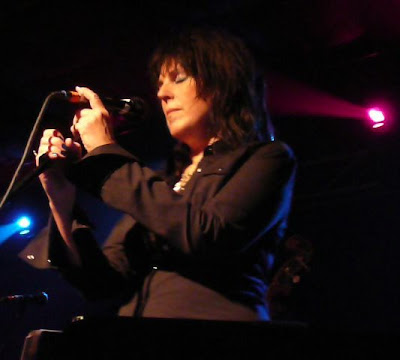 This past Friday night we got to see Lucinda, touring in support of her new record, Little Honey.
Opening for her was a band called Buick 6. I hadn't heard of them but they came out, played 6 songs and rocked the house in a big way, finishing with an instrumental cover of Led Zeppelin's "Black Dog." Turns out this is the band backing Lucinda so when she hit the stage and they came out with her I figured this might be a different Lucinda than I'd seen in the past.
This was a great show! Buick 6 is 4 younger guys and includes a couple of hot shot guitar slingers. I think she really likes playing with this band and they have given her a much needed shot of energy when it comes to playing live. They also have made her older songs sound fresh.
Even though Lucinda is known more for country, Americana, whatever you want to call it, she has the heart of a punk rocker. Playing with this group it comes out! She is rocking, having fun and it shows.
Her set lasted almost 2 hours. She didn't do much of the new material though. "Real Love," "Honey Bee," "Tears of Joy" and the AC/DC cover "It's A Long Way To The Top," which ended the show, were the only songs off the new record.
The set was a nice mix from her entire catalog including some of the old blues standards she used to play along with several songs from Essence and Sweet Old World. She also did an acoustic set of 4 or 5 songs including "Crescent City," my favorite! They opened the encore with the old Rod Stewart rocker, "Every Picture Tells A Story."
I did video several songs and most are up on my youtube site already. There are a couple I still need to upload and eventually it will happen.
Posted by Deb at 3:41 PM No comments: 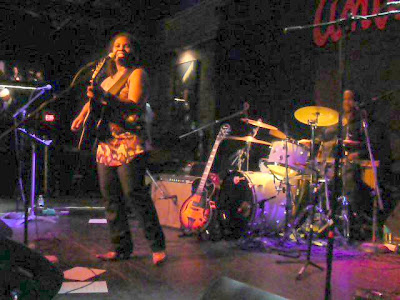 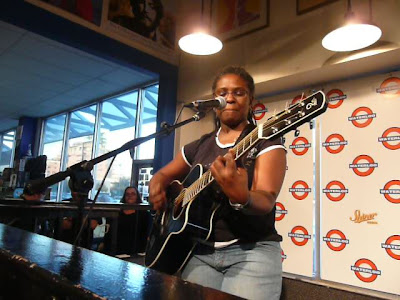 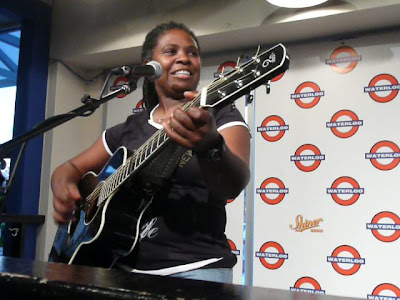 Yesterday was the cd release for Ruthie's new record, "The Truth According To Ruthie Foster." She came back home to Austin to play 2 shows, one free in-store at Waterloo Records and later that evening at Antone's Blues Club. It was great of her to come back on the day of the release especially since she is touring on the East Coast with NYC the night before and then back to New Jersey the day after Austin.
I sort of hate writing this review because I love Ruthie Foster, especially live.
The Waterloo performance was not a big deal. These are free shows and usually they have an autograph signing and provide free beer, no complaints. It was very late getting started because Ruthie flew in from NYC and the flight was delayed. It was scheduled for 5pm but was almost 6pm before she got there. I felt bad for her. That can't be easy, jumping off a plane, late, stuck in traffic and then flying in the door with your guitar and having to perform...right now! She sucked it up and played 4 or 5 songs and then had to fly right back out the door to get ready for the 8pm Antone's show with her full band.
The Antone's show - first off, Antone's is not my favorite place. It is the premier blues club in town, legendary and one of those places in Austin that tourists always come to. Nothing wrong with that. For me, it's too dirty and the women's restroom is like walking into a cesspool. I will always overlook that stuff if there is somebody I really want to see playing there. Ruthie live is always a rousing, get up off your rear, dancing and singing show, kind of a rock n roll revival. Last night, she didn't have her usual energy. It was a lethargic performance. Granted, Ruthie lethargic, is better than most who are doing their best but when you know how they normally perform and don't come close to that, it's disappointing. Besides the lack of energy there were 2 other issues for me. The pacing of the show was not good. There were too many slow songs played back to back. At one point 3 in a row just about had the whole place back on their heels. Then, she might crack a good up tempo tune and then boom, right back down to a couple of slow ones in a row. The crowd couldn't get anything going with her, I didn't think. The last thing that was bothersome is when she did play one of her great revival rockers like "Travelin Shoes," "Real Love," or "Walk On," they included these marathon jams/solos to the point you couldn't remember what song was even being played. Every song doesn't need an extended sax/organ/bass solo. They played for almost 2 hours but only 13 songs. I know because I have one of the set list copies.
It wasn't all bad. The band was terrific. Joe Silver, this short, little white guy on lead guitar, plays more soulfully than just about anybody I can think of. It's not that he did these killer solos where he was down on the fret, bending strings but wow, he and Ruthie, you would think, have the same blood flowing through their veins. The guy is fantastic with her music.
All in all, yeah, I was disappointed, obviously. But, you can bet the next time Ruthie comes back to Austin, I will be there to see her again. I've seen her a number of times and this show, I'm sure, will be a distant memory.
Posted by Deb at 12:15 PM No comments: