Finally got the blog up to date 2 days before the madness begins, SXSW 2010. Not sure when I'll be writing next, probably after it's all over. Still gotta knock out my schedule! Painful choices ahead! I know, it's a tough problem to have.
Posted by Deb at 8:36 AM No comments: 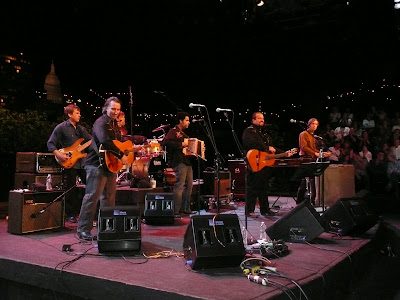 This was a first for me. KLRU tweeted a free show during their pledge drive, just rsvp to get in, so we did. It was called Texas Music Extravaganza. What it ended up being was clips of the history of Doug Sahm which they were showing live on tv, interspersed with an occasional song from Raul Malo. So, we sat there for 2 1/2 hours to hear 3 live songs and spent the rest of the time watching a big screen of the Doug Sahm show. They had Shawn Sahm and Augie Myers there but neither performed. Everybody I talked to thought they would be performing, also. It was different. Not sure I'd go back for 3 songs again, even with the free beer they provided! I think it served the station well as a backdrop for their pledge drive so, what the heck, it was a good cause.
Raul had The Trisha's with him to sing harmony. It was low key but he was good, as always. What a voice!
Afterward, a group came out, young guys, called the Adam Aguilar Band. They were terrific! Only played 2 songs, got the crowd hopping and then it was over! I will look for these guys. They were good! Had that whole TexMex rock sound going.
Posted by Deb at 8:29 AM 1 comment:

me with the one and only JIMMY WEBB 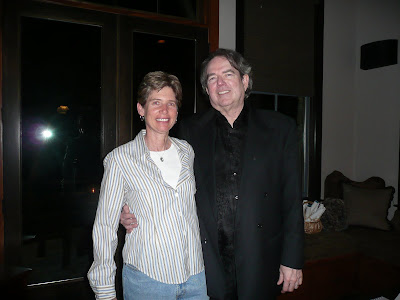 What can you say? Got to see a songwriter who really shaped my love of music. When I was a kid, it was The Beatles along with Jimmy Webb's songs. The Beatles got the rock side going, of course. But the singer/songwriter music, long before Carole King, Joni Mitchell, James Taylor or Bob Dylan, for me it was Glen Campbell singing "By The Time I Get To Phoenix."
Not only did I get to see him but in a small, intimate, beautiful room with perfect sound. Not sure how many times I had to pinch myself.
This was my first visit to Blue Rock. It is about 40 miles south of Austin, out in the Hill Country. It is a recording studio but once a month they hold a concert. They don't sell tickets. It's pretty much word of mouth. I'd always find out about their shows a day late, as in already sold out. I believe it holds around 100 people. I'd already missed out on Ruthie Foster and Shawn Colvin! So, this one for March came up as "Mystery Guest." You had to take a chance, reserve your seats and find out later who the artist would be. When I got the email about a month ago saying it was Jimmy Webb, well, I must have stared at that for minutes. You could've knocked me over with a feather.
As for the concert, he came out, sat down at a beautiful grand piano and proceeded to play all of the songs and tell so many memorable stories about the songs and his life. Seriously, it was an incredible night. He is very warm, funny, really knows how to tell a tale. We got to hear about several trips with Richard Harris traveling through Ireland, raising hell. He spoke of his admiration for Glen Campbell. Said he's the most natural musician he's ever run across. That is some high praise. Along with Glen, he talked about Frank Sinatra as the other performer who really launched his career because they always gave public credit as to whose songs they were singing. I think Jimmy was 17 years old when he wrote "Didn't We" and was summoned to the house of Frank. Can you imagine? These were the kind of stories we got to hear about.
As for the music, we got it all: "Highwayman" "By The Time I Get To Phoenix" "Wichita Lineman" "MacArthur Park" "Galveston" "Didn't We" "Up, Up and Away," need I go on?
If I live to be 120 and don't know my own name, I believe I'll remember this night.
$35 ticket price. Worth 10 times that for me.
Posted by Deb at 8:10 AM 1 comment:

BETTYSOO and the Danes (wish I knew their names!) 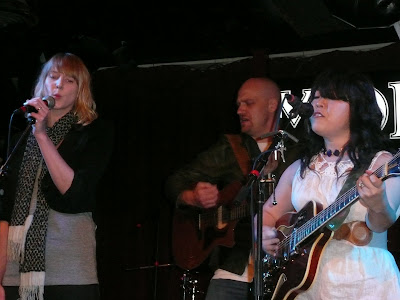 BETTYSOO and WILL SEXTON (wearing his cool BettySoo shirt) 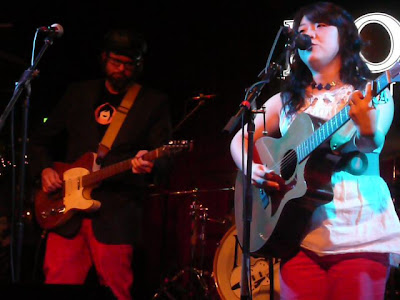 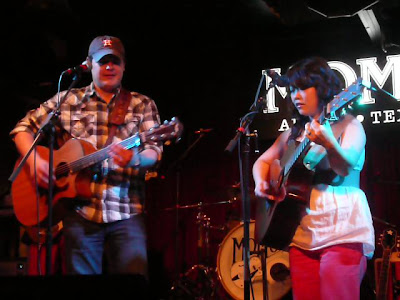 BettySoo and her band, I guess they have a name now, Willing Company(!), are playing a weekly set on Wednesdays in March, at Momo's. Currently, she has 2 lead guitar players, Jeff Plankenhorn and Will Sexton.
The 3-3 show was a run of the mill show. Good, as always. The 3-10 show, on the other hand, was pretty great! The material from one week to the other wasn't noticeably different, but the playing sure was. The band had punch this week. About the only way I know how to describe it. I tell ya, people think BettySoo is this little folk singer (and she is!), but there is a lot more to her than that. If you haven't seen her rockin' with the band, you are missing out! She and these boys play.
Another nice treat was Ben Mallott joining her for Gram Parson's "Return of the Grievous Angel."
$7 cover, a bargain.
PS
Almost forgot the best part of the show! BettySoo brought a couple of people up from Denmark who are here for a couple of weeks at the House of Songs. This is a place in Austin where the Danes come over and collaborate with Austin songwriters. They also play some clubs, too. So, that day BettySoo had been at the House of Songs and together with this couple wrote a song and they played it that night! It was a catchy country tune which sounded great, even at the end when they didn't know how to stop it and it just fell apart! I tell ya, that's what is cool about being here. You get to witness these collaborations, hear songs the day they were born! That stuff doesn't happen everywhere.
Posted by Deb at 7:38 AM No comments:

ELIZABETH WILLS along with SHELLEY KING, SUSAN GIBSON and BETTYSOO 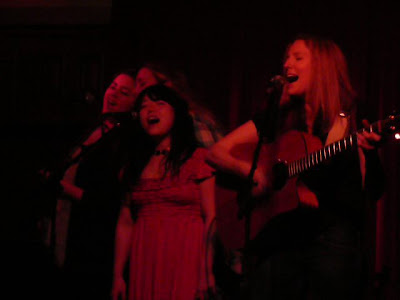 This was a cd release show for "Love Comes Home." Came out about a month ago. Really good. This show was the first time I've seen her with a band. I think the guy on lead guitar is named Brad Thompson. He was terrific with one heckuva soulful voice. Brad Houser was on drums. He plays with Guy Forsyth and is fantastic. The producer of her record, Mark Hallman, played bass.
The show was 2 sets, with a ton of material from the new cd. Also, because we're in Austin, we got to have all of the additional singers from the album show up to sing at this show. We're talking Sara Hickman, Shelley King, Susan Gibson and BettySoo! A real highlight was all of them, except Sara, together as the choir for "Million Angels." Gave ya goosebumps.
Elizabeth also had some nice interaction with the crowd, opening up and telling a few personal stories, including one before she played Joni Mitchell's "Clouds." The short version is she grew up with Joni Mitchell, thanks to her dad. As a little girl, she was terrified of storms. When she heard "Clouds" it made her feel not alone anymore. Said it was the first time she realized music could save her. These are the moments you can't experience just listening to a record and part of what I love about the live experience.
A great crowd on this night and a terrific show. No cover charge.
Posted by Deb at 7:09 AM No comments: 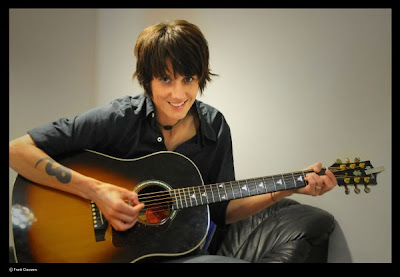 Went to this show without really knowing who she was. We were on the campus already for a basketball game and decided well, if she's playing the Cactus, she's got to be good.
She was spellbinding. A smoky, yet soft, voice. Great melodies. A real pleasure to listen to. Originally from Belgium, I think.
It wasn't until she said here's an old one you'll recognize and played "Not an Addict" that I realized who she was, the lead singer of K's Choice.
Anyway, I loved her in an acoustic setting. Gotta buy some of her music. Short of cash the night of the show and they didn't take credit cards for merch.
I believe admission was $15. Well worth it.
Posted by Deb at 6:50 AM No comments: