The weekly Bruce gig got a fresh shot last night as his wife, Kelly Willis, joined him for a couple of songs. Kelly came out with a great record last year called Translated From Love. Chuck Prophet produced it & they co-wrote several songs together. However, with 4 kids all under the age of 8, she didn't go out & tour behind it too much so if you don't know about the record, that's understandable. All I can tell you is you ought to have it.
She has a great voice, period. But it is made for country.
She & Bruce did Travelin' Soldier which she harmonized on, then did Heaven's Just A Sin Away which she sang lead on. It was great hearing her. She sure is missed.
Posted by Deb at 7:11 AM No comments: 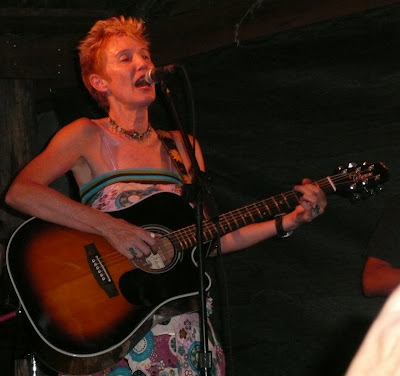 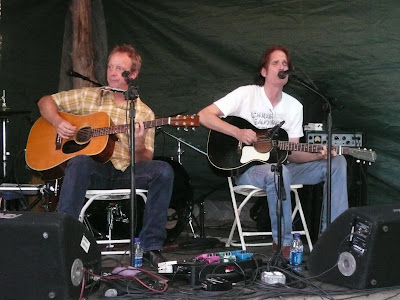 Eliza plays this Unplugged series every year & always draws a big crowd. Last night was no different.
Opening was her brother Tony & Randy Weeks. Tony I knew of because he opened for Eliza at Cactus Cafe back in June. At that show he also played with her band. He is, as a singer, pretty low key so at the Cactus it worked very well. That is a small, intimate listening room. Wasn't the same feel at Shady. He is a great guitarist & his guitar was not loud enough which was a shame. I didn't know who Randy Weeks was but now that I've heard him I'll be checking him out. Turns out he lives here & plays around often enough. They would play a couple of Tony's songs, then a couple of Randy's. The last song they played was Can't Let Go which Lucinda Williams had a hit with & really launched her album Car Wheels on a Gravel Road. Randy wrote it.
Eliza & her band took the stage a little after 8pm. They played 2 sets. It was a good mix of old classics along with the new stuff from Beautiful World. I love her band. Glenn Fukunaga on bass is really good. He plays on a lot of music coming out of Austin including Ruthie Foster's last record, The Phenomenal Ruthie Foster. Then on lead guitar is Mike Hardwick who plays so subtly & adds so much to her sound. Lastly Cisco Ryder is on drums. He is Eliza's son & in this case it's true what they say, the fruit doesn't fall far from the tree. A good musician & when he harmonizes their voices together are so nice.
A funny comment by Eliza was after she finished playing Man of God which, for my money, is by far the best song written about the idiot boy, George W. Bush. She said after November she will no longer play the song & might write a new one to play called Man is Gone. We all said amen to that!
Posted by Deb at 2:23 PM No comments: 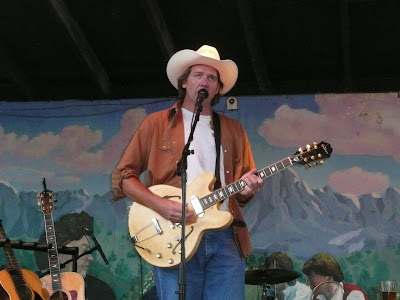 Another Austin Town Dance with Bruce at Scholz Beer Garten last night. The crowds have grown steadily since Bruce started this last month & I would say it has more than tripled since the first show. The place was jam packed & staff were digging out chairs from under the stage.
I decided I really needed to get some videos with the dancers as Bruce draws a dancing crowd. Austin is probably one of the few areas left where you will find all age groups at a show who not only dance but do it very well. It is so much fun to watch. White boys who can dance!
It's kind of funny, Melissa Etheridge was playing at a theatre about a mile away tonight & I wondered why anybody would spend $130 (what a ripoff!) for one of her tickets when you could be at Scholz for free listening to Bruce & the band while watching the dancers twirl around?
Posted by Deb at 7:40 AM No comments: 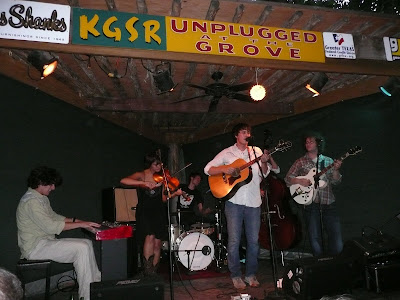 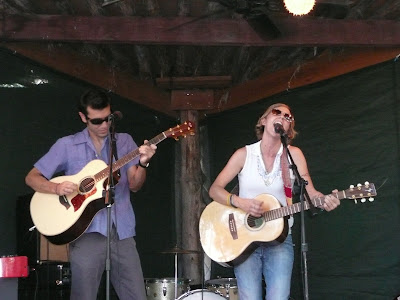 THE BELLEVILLE OUTFIT at Shady Grove 8-7-08

If Asleep at the Wheel crashed head-on into The Manhattan Transfer the fallout would be The Belleville Outfit. This is a group of 6 young kids (I know they're in their 20's but they all looked about 16 to me) full of energy & with a passion for playing that made it a ton of fun to be in the audience. They play something I would have to call CountryJazz, parts swing, beebop and doowop with a hoedown twang. I can't recommend them enough. If they come anywhere near you, go see them!
Opening was singer/songwriter Amy Cook. She was accompanied by the same great guitarist who played with Sahara Smith a while back at Shady Grove. We saw her at the ACL Festival last year with her band so it was nice to catch her again in an acoustic setting.
Posted by Deb at 12:37 PM No comments: 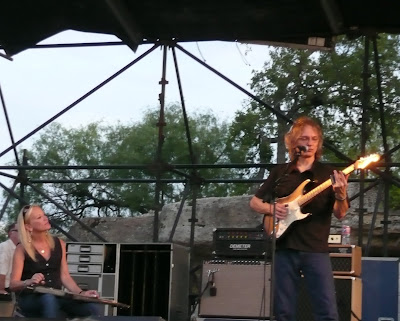 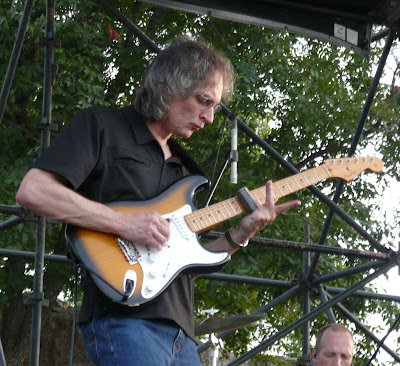 SONNY LANDRETH at KGSR Blues on the Green 8-6-08

Tonight was Sonny Landreth, the slide guitarist from Louisiana. Sonny plays what I call blues rock with a mix of cajun swamp and zydeco thrown in. I did go up to the front of the stage to watch for a while. It's not often you see slide played as a lead so it was fun to watch this guy up close.
We also got a local treat as he brought Austin musician Cindy Cashdollar up to play several songs with him. She played lap steel tonight & had some killer solos! When she's not in town she can be found touring with the likes of Bob Dylan, Van Morrison & a few other fairly well known musicians.
Posted by Deb at 7:17 AM No comments: 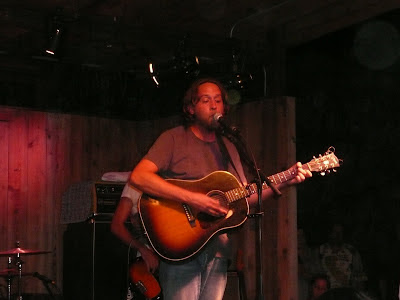 This is Hayes Carll from his song She Left Me For Jesus:

SHE LEFT ME FOR JESUS AND THAT JUST AIN'T FAIR
SHE SAYS "THAT HE'S PERFECT." HOW COULD I COMPARE
SHE SAYS "I SHOULD FIND HIM." AND I'LL KNOW PEACE AT LAST
BUT IF I EVER FIND JESUS I'M KICKIN' HIS ASS

IT COULDA BEEN CARLOS OR EVEN BILLY OR TED
BUT IF I EVER FIND JESUS
HES GONNA WISH HE WAS DEAD
AHHH, MAN

Arguably the best country song ever written!
Hayes has a new record out this year with that song on it. The album is called Trouble In Mind & is up for Americana Record of the Year. I'll be surprised if it doesn't win. It's a good album from beginning to end.
He has great lyrics & plays some good, fun honky tonk along with ballads & rockers.
Hayes played for a little under 2 hours & even with them starting at 10pm, it was still very hot out. He & his band put on a good show.
Opening for Hayes was a local band, The Gougers. First time seeing them, really enjoyed the show. If you go to this link:
http://www.freegougers.com/
you can download their album for free. All you have to do is give them the email addresses of 3 of your friends. They will contact them once with the offer of the free download. Pretty cool deal. One of the songs on the album, Everybody Knows, is played on KGSR here in Austin. Good tune!
Believe this is the 1st show I've posted since the Fan Drive that wasn't free! $15 cover for these 2 bands, unbelievable how cheap live music is here.
Posted by Deb at 1:28 PM No comments: 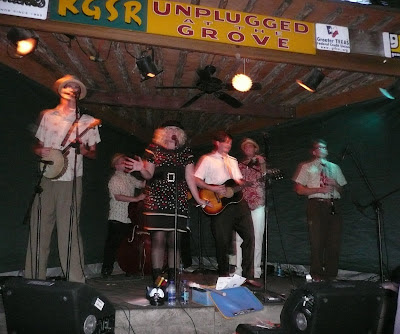 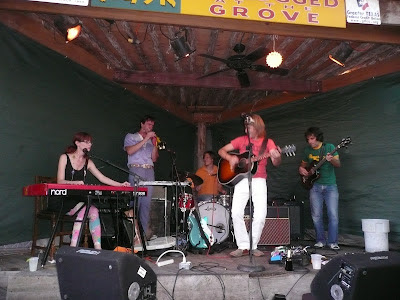 The carnival came to Shady Grove last night. I hadn't seen or heard White Ghost Shivers so I did go to their MySpace page before heading over to Shady but even that didn't prepare me for their live show. Talk about entertaining! A mix of jazz, vaudeville, ragtime, swing, blues, you name it, you got it with this crew. If you didn't see them you might think they are some kind of novelty act but they are really good musicians, singers and dancers. They are just wild on top of it all. That 2 hours flew by. Check them out! It is a shame they started a little late & it was getting dark so the video is therefore not as clear as I would have liked, especially for such a visual band.
Future Clouds & Radar I had heard a little bit & had been looking forward to seeing for quite a while. They didn't disappoint. This is a good rock band with catchy melodies, good pop rock.
Posted by Deb at 5:20 PM No comments: